Russian missiles struck airports, military positions and cities across Ukraine, including the capital of Kyiv, early Thursday as Vladimir Putin launched the most dangerous phase of his eight-year war.

Witnesses and reporters heard blasts from Kharkiv in the east to Kyiv in the north to Odessa in the south, signaling Russian’s sights are set far beyond the Donbas region.

In a statement, Ukrainian President Volodymyr Zelenskyy said his nation suffered “strikes on military and other important defense facilities,” adding that “border units are under attack, the situation in the Donbas has degraded.”

“This is an unjustified, deceitful and cynical invasion,” he said.

Separately, Ukrainian Defense Minister Oleksii Reznikov added that the “enemy began intense shelling of our units in the east, as well as military control centers and airfields in other regions.”

CNN quoted a Ukrainian government official who said the attack has already led to hundreds of casualties, a figure POLITICO could not immediately verify.

Zelenskyy spoke with Biden early Thursday morning local time. In a statement about the call, Biden said “the United States and our Allies and partners will be imposing severe sanctions on Russia.”

The strikes on Ukraine followed Putin’s announcement of a “special military operation” against Ukraine, during which he falsely claimed that two Moscow-backed breakaway regions inside Ukraine were under attack by Kyiv’s forces.

Putin declared: “I have declared a special military operation” for the “demilitarization and de-Nazification of Ukraine.”

“This is the red line that I have spoken of many times,” he continued, apparently wearing the same red tie and speaking from the same office from which he gave an address on Monday. “They have crossed it.” Putin vowed not to occupy the country, but demanded that Ukrainian forces lay down their arms or bear responsibility for “bloodshed.”

And in a clear message to the United States and its allies, Putin warned foreign powers not to interfere in his operation: “If you do, you will face consequences greater than any you have faced in history. All relevant decisions have been taken. I hope you hear me.”

His pronouncement at 5:45 a.m. Moscow time — during a simultaneous U.N. Security Council meeting in New York, at which Western nations pleaded for Putin to exercise restraint and de-escalate — could spark the largest land war in Europe since World War II, one that could result in the deaths of thousands of Ukrainian and Russian troops and civilians, and spark a refugee crisis.

Putin rebuked months of Western diplomatic entreaties to end the crisis sparked by the amassing of Moscow’s nearly 200,000 troops on Ukraine’s border. Instead of shaking American and European hands, the Russian president slapped them away, pointing his forces toward the Ukrainian lands he has directed them to seize.

Zelenskyy made an impassioned speech in the early hours of Thursday morning local time, rallying his country in the national tongue before switching to Russian in an appeal not to the Kremlin, but to Russian citizens. “Lots of you have relatives in Ukraine, you studied in Ukrainian universities, you have Ukrainian friends,” he said. “You know our character, our principles, what matters to us. Listen to yourselves, to the voice of reason. The people of Ukraine want peace.”

“The prayers of the entire world are with the people of Ukraine tonight as they suffer an unprovoked and unjustified attack by Russian military forces,” President Joe Biden said in a statement released by the White House. “President Putin has chosen a premeditated war that will bring a catastrophic loss of life and human suffering. Russia alone is responsible for the death and destruction this attack will bring, and the United States and its Allies and partners will respond in a united and decisive way. The world will hold Russia accountable.”

Biden will address the nation on Thursday morning after an emergency meeting with members of the G7 at 9 a.m. on the Russia-Ukraine situation.

Western leaders warned for weeks that the chances of getting Putin to turn back were low amid intelligence reports that said he had, in recent weeks, sufficient military forces along Ukraine’s border to invade “at any time.” Now they hope that an escalating series of sanctions will prove strong enough to deter Russia from pushing deeper into Ukraine.

“President Putin gets a vote. And if his vote is for aggression, we’re fully prepared for that,” Blinken told ABC News on Wednesday night shortly before the Russian leader’s address.

For the moment, Putin seems willing to withstand the crushing effects of those penalties on his inner circle, his people and the Russian economy. He also seems confident that his reconstituted military can overwhelm Ukraine’s professional and civilian resistance, despite the injection into the country of U.S. and NATO arms, ammunition and funding.

U.S. lawmakers say the West must make Putin pay. “[T]he entire Post World War international order sits on a knife edge. If Putin does not pay a devastating price for this transgression, then our own security will soon be at risk,” Sen. Chris Murphy (D-Conn.), a longtime Ukraine backer on the Senate Foreign Relations Committee, said in a statement.

The latest Russian military moves sent markets reeling around the world. Oil prices surged, with the benchmark Brent crude oil topping $100 a barrel for the first time since 2014. Stock futures tumbled due to worries about the impact of higher energy costs, while traders braced for a new round of sanctions against Russia expected from the U.S. and its allies on Thursday.

The Russian president, who first invaded and laid claim to pieces of Ukraine in 2014, has long indicated he believes that Ukraine is a part of Russia.

“Modern Ukraine was entirely created by Russia or, to be more precise, by Bolshevik, Communist Russia. This process started practically right after the 1917 revolution, and Lenin and his associates did it in a way that was extremely harsh on Russia — by separating, severing what is historically Russian land,” he said earlier this week in a dark and meandering speech filled with historical falsehoods.

It seems clear that his goal is to further extend Moscow’s influence over former parts of the Soviet Union, whose dissolution Putin has called the “greatest geopolitical catastrophe of the 20th century.”

How far his desire to reclaim former glories will drive him during the conflict remains a big question at the start of this new phase in the war. U.S. and European officials, as well as analysts, assess that Russia will try to take eastern Ukrainian lands up to the Dnieper river that roughly bifurcates the country. And with varying levels of confidence, they suggest that Russia has designs to capture Kyiv, not just attack it. 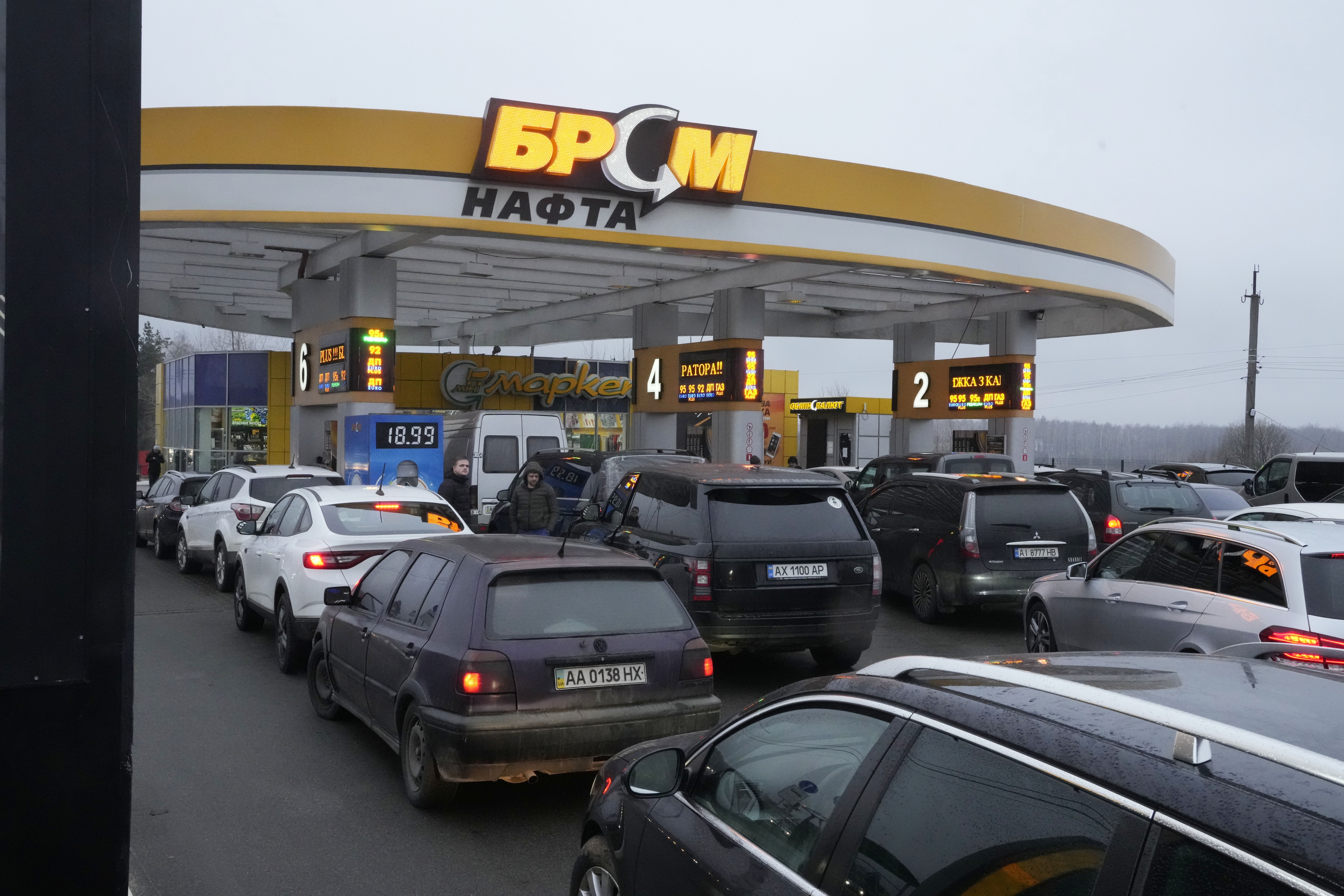 To date, neither the U.S. nor any NATO country says it wants to send troops to assist Kyiv — leaving Ukrainians largely on their own to fight against Moscow’s troops. The U.S. and its allies intend to continue supplying the Ukrainians with arms throughout the war.

Putin’s goal appears to be to push back NATO to its pre-1997 posture, a demand roundly rejected by Washington and its alliance allies. Biden has made clear that U.S. troops in the region are not there to fight Ukraine’s war, but will defend every inch of NATO territory.

The Kremlin boss and his top aides sought to frame an invasion as a response to an expanding alliance and a westward-leaning Ukraine. Kyiv’s desire to eventually join NATO — emphasized passionately by Zelenskyy over recent weeks — was portrayed in Moscow as an existential threat to Russia’s stability.

But Western leaders repeatedly made clear that Kyiv had the right to set its own course and not bow under pressure from its larger neighbor, even as they emphasized it would take years before Ukraine could become NATO’s 31st member.

Now, Ukraine is battling simply to remain a member of the international community.

“We will defend ourselves. When you attack, you will see our faces, not our backs,” Zelenskyy said in his speech hours before Russian troops attacked.

Sudeep Reddy contributed to this report.