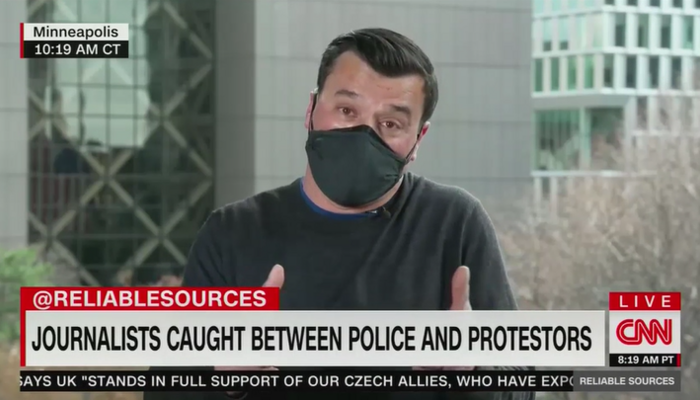 On Friday, The Washington Post published a story headlined “TV news crews are increasingly threatened with violence on the job.” Nowhere in this story was any mention of the word “Antifa,” despite their repeated habit of attacking TV news crews. Media reporter Paul Farhi explained:

One in five TV news directors surveyed by the Radio Television Digital News Directors Association said their crews had been attacked at some point last year. About half of the episodes stemmed from covering mass gatherings, such as the protests that followed the murder of George Floyd and demonstrations protesting pandemic lockdowns….

Station managers who responded to the industry survey said their journalists had been verbally harassed, punched, slapped, shoved, spat on, robbed at gunpoint, and hit with rocks and water bottles. At a rally for Trump, one attendee “deliberately coughed on our reporter,” one news director reported.

Many of the culprits were demonstrators, managers said, but police have also been involved in roughing up journalists.

“Demonstrators” are attacking reporters, but they somehow none of them are affiliated with Antifa or Black Lives Matter. The story was illustrated by a photo of Associated Press video equipment smashed by rioters at the Capitol on January 6. Somehow only one flavor of extremism is worth identifying.

Farhi found an expert to blame Trump and conservative media:

Some of the increased threat may be an upshot of the pandemic and the tensions created by lockdowns and economic disruption, said Bob Papper, an adjunct professor at Syracuse University’s Newhouse School of Communications who conducted the industry survey.

But he blames some of it on the continuing demonization of the news media by Trump and his allies, including those in the conservative media.

“It’s clear a lot of people are still angry, and they’re angry at the media,” he said. “It’s the expected consequence of calling the media ‘the enemy of the people.’ ”

By avoiding the question of radical-left violence toward journalists, Farhi and his editors could also avoid the way the national media either fail to report attacks on their reporters, or their reporters come on to say they sort of deserved it.

On the one-year anniversary of Charlottesville protests in 2018, NBC News avoided mentioning Antifa militants grabbing at their equipment and swearing at them. Reporter Garrett Haake vaguely mentioned reporters were “heckled.”

In mid-April, CNN stayed quiet for half a week where one of their crews in Brooklyn Center, Minnesota was pelted by water bottles and chased off by a violent Black Lives Matter mob. Then it surfaced on Reliable Sources, where host Brian Stelter bizarrely said it was “ridiculous” that they were covering up the assault. Reporter Miguel Marquez insisted “I cannot blame them for being angry….there were people who were angry at everything and everybody and we happened to be in the wrong place at the wrong time.”

And talk about Antifa’s violence toward reporters starts with freelance journalist Andy Ngo, who sought to chronicle Antifa violence and ended up beaten into a brain bleed in July 2019. The Post barely noticed it back then.