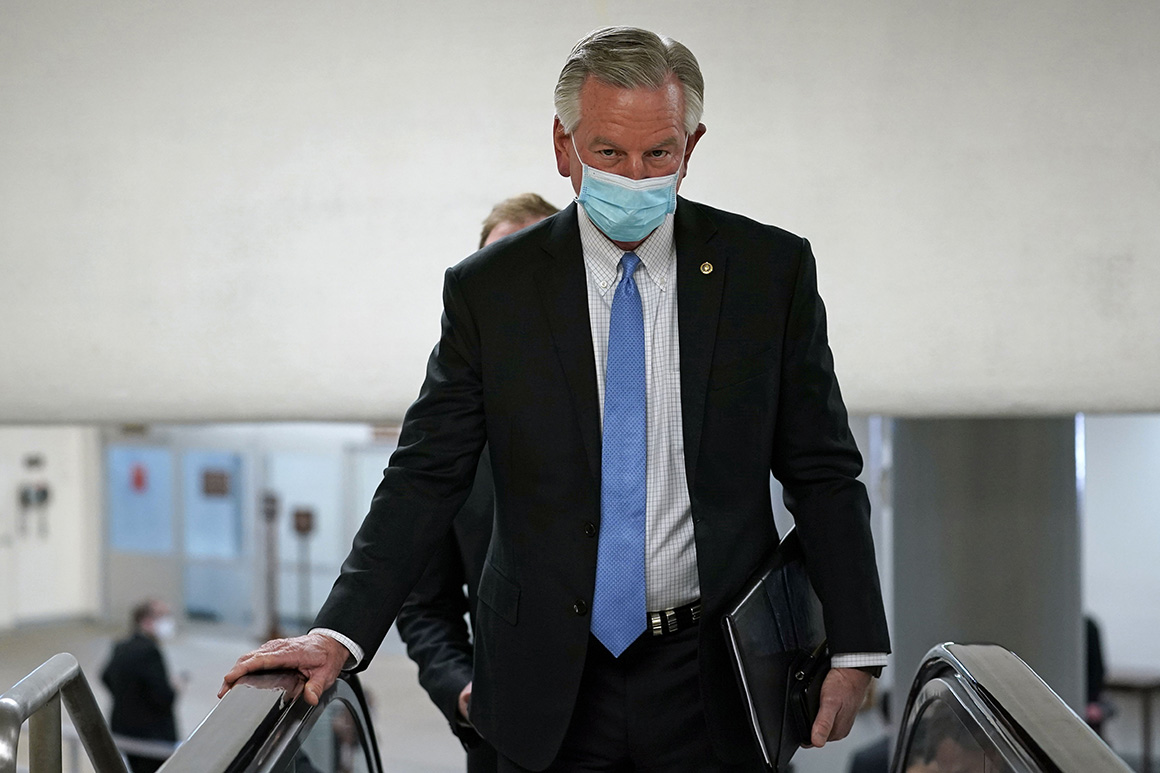 Sen. Tommy Tuberville revealed late Wednesday that he spoke to President Donald Trump on Jan. 6, just as a violent mob closed in on the Senate, and informed Trump that Vice President Mike Pence had just been evacuated from the chamber.

“I said ‘Mr. President, they just took the vice president out, I’ve got to go,’” the Alabama Republican told POLITICO on Capitol Hill, saying he cut the phone call short amid the chaos.

Tuberville’s recollection is a new and potentially significant addition to the timeline of Trump’s reaction to the violent mob of his supporters as it stormed the Capitol. Aides to the House impeachment managers, entering the second day of opening arguments, indicated the new details may come up before they rest their case Thursday and turn the trial over to Trump’s defense team.

House Democrats prosecuting Trump’s case in a Senate impeachment trial have emphasized that Trump took little action to address the rioters despite desperate entreaties from his allies. Tuberville’s recollection of the call is the first indication that Trump was specifically aware of the danger Pence faced as the mob encroached on the Senate chamber.

Just as significantly, the call occurred at virtually the same moment Trump fired off a tweet attacking Pence for lacking “courage” to unilaterally attempt to overturn the presidential election results — a tweet that came after Pence and his family were rushed from the Senate chamber.

Senior aides to the House impeachment managers said Thursday that they considered Tuberville’s comments to be new information that confirms their case that Trump abandoned Pence and Congress to the mob rather than attempt to quell the violence.

“It squares with what we already know, that the president knew his vice president was in danger and did nothing,” said one of the aides, adding, “We will have more to speak on that point today.”

It’s long been unclear precisely when Trump learned of the danger that Congress and his vice president faced — though it was broadcast all over live television — but Tuberville’s claim would mark a specific moment Trump was notified that Pence had to be evacuated for his own safety.

The House impeached Trump last month for inciting the Jan. 6 insurrection and began mounting their case in the trial Wednesday, the first of two days to present their evidence. The Tuberville call was among their examples to show that Trump remained fixated on stopping Biden’s victory even as it became clear that pro-Trump insurrectionists were ransacking the Capitol. Trump, they said, did nothing to publicly call off the rioters and instead phoned Tuberville to ask him to aid the effort to stop the transition of power.

As House impeachment managers prepare to wrap up their case Thursday, their top aides also previewed a final aspect of their arguments: That in the aftermath of the Capitol violence, Trump showed no remorse for his conduct and incitement.

House managers say the Trump-Tuberville call took place shortly after 2 p.m. Pence was evacuated from the chamber at about 2:15 p.m. and Trump sent his tweet attacking Pence at 2:24 pm. The entire Senate was cleared by about 2:30 pm.

The existence of the call between Trump and Tuberville, though not the specifics, has been previously reported.

The managers noted that while the mob encroached on the Senate chamber, Trump was ignoring his allies’ pleas for him to publicly call them off. Instead, Trump accidentally phoned Sen. Mike Lee (R-Utah) as he sought to get in touch with Tuberville and request that the Alabama senator continue objecting to the election results in order to buy time. Lee, according to reports in Utah’s Deseret News, the Salt Lake Tribune and CNN, passed his phone to the newly elected lawmaker for the brief call. Lee on Wednesday night objected on the Senate floor to how his role in the call was portrayed.

Aides to the former president did not immediately return a request for comment.

Burgess Everett and Meridith McGraw contributed to this report.